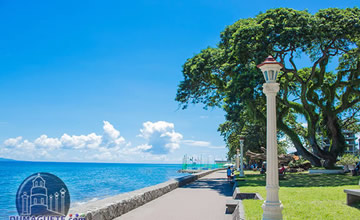 My name is Jim Vernon and I grew up in Miami, Florida and was raised there for most of my life. My family were middle class people. My Dad worked in a parking garage and my Mom sometimes worked as a nurse in the evenings. Sometime when I was 4 or 5 years old, my Mom had an experience with God that changed her life. She started going to church and always took me with her. Through my relationship with her and what I must have received from the churches she took me to. I had something put in my heart. I’m not really sure how it got there.

I remember at the age of 7, I was in the front yard shooting my bow and arrows. I would shoot them from some distance and the arrows would go under the grass in the front lawn and you couldn’t find them. Since I was a very methodical person I would get down on my knees and search one small square at a time so that I would be sure to find it. I searched for a long time and just had to give up. In my desperation I stopped, stood up with my back to the spot where I knew the arrow was and prayed: ” Jesus, I can’t find this arrow will you help me? “. I then turned around and there was the arrow, my eyes went right to it. So you can see when I was very young Jesus was working in my heart. I knew he heard me.

After years of going to church, when I was 12 years old, I was in a meeting where we all had our heads bowed and our eyes were closed. The pastor was asking if anybody would want to ask Jesus to forgive them for the things that they had done in their life that didn’t please God and receive Jesus as the leader of their life. While I was sitting there I heard a voice say to me, ” You know you’ve never asked Jesus to forgive you and come into your life? “. I said to myself, ” Yes, you’re right.” So that night I asked Jesus to forgive me and come into my life. I had the same experience that my Mom had years earlier.

For the years following and into the teen years, I always went to church. I wanted to please God but also wanted to drink with my friends and chase the girls. You probably know the trouble that can get you into. At the age of 18, I went into the Air Force and went to Biloxi, Mississippi for technical training. While I was there I did go to church, but not frequently. I continued to go drinking and of course chase the girls like most young men do, especially airmen in the Air Force. This was the beginning of a dark time in my life where I really drifted away from God. When training was completed, I was sent overseas to the Philippines and started my training into new levels of drinking and chasing the girls. I had pretty much become “one of the guys” and my relationship with Jesus was at an all time low. This was during the Vietnam War about 1967. After my term in the Philippines was over, I was sent to Vietnam for about a year and then back to the Philippines.

This time in the Philippines, since I knew the ropes, I lived off base and took my life style to new extremes. We would go out all night bar hopping and would sometimes drink more than a case of beer – and I really didn’t like the taste of beer. We also were now starting to smoke marijuana. My life was pretty much out of control. To make things even more exciting we all had motorcycles and spent most of our time racing from place to place at speeds exceeding 90 miles an hour. Everything was coming to a climax.

One evening after a fight with a girl friend, I was coming home after having quite a few drinks and was very upset. I was heading down a two lane highway at about 95 miles an hour and was shouting to God: ” God kill me, just kill me! “. Then all of the sudden my lights showed a horse drawn wagon in front of me and I only had a split second to lean hard left. My right knee hit the hub of the wagon wheel. I went sliding down the highway with sparks flying. We came to a stop on the left side of the road in the gravel. It turns out my right knee was shattered and had an open wound. I was in pretty bad shape. After a long time, an ambulance finally came and took me to the base hospital. There wasn’t any pulse in my right foot. This turned out to be a blessing because the broken bone had wrapped around the artery and cut off the blood supply to my right knee. This had kept me from bleeding to death at the accident scene.

After a month, I was transported by air to Tampa, Florida near where my parents live in Miami. I was now in a spica cast which goes from your chest to the bottom of your foot and I looked like a mummy. One day they took me down to physical therapy to teach me how to walk on crutches. While I was there I saw an older patient sitting on a table and I said hi, but it was only a short conversation. He would turn out to be a very special person later in this story. After getting me up on crutches, I was sent home to my parents for a thirty day leave. It was great to see my family but the joy was short lived. After 2 days a dark stain appeared on the side of the cast by my knee. My Dad took me back to Tampa the next morning and the doctor found the knee to be infected, a serious infection.

That night my Dad went back to Miami and I was put into an isolation room by myself. All during the evening the nurses kept coming in taking blood. They looked at me as if I were a dead man, something was seriously wrong. In the middle of the night, I was lying in bed and I heard the same kind of voice that I had heard when I was 12 and it said: ” You’re going to die!”. That scared me. For the first time I cried out to Jesus, ” Have mercy on me, Lord, have mercy! “. The next day I had an operation on the knee and the day after was flown to Wilford Hall Medical Center, San Antonio, Texas.

I found out a year later while reading my medical records that at Tampa they had found a life threatening disease in my blood, but when I arrived at Wilford Hall the doctors couldn’t find any trace of it. I believe Jesus had heard my cry for mercy and had removed it.

When I arrived at Wilford Hall, I was put in an isolation room with two other men who also had infections, but there was something special about these men in that they were studying the Bible and praying together. Jesus was definitely drawing me back to him. The two men finally left my room and I was alone.

I drifted from the Lord again and began a long period in the hospital that would last almost 2 years. The doctors main goal was to get rid of the infection that was in my knee. I had four more operations on my knee and no matter what they did they couldn’t get rid of it. Once they thought they should amputate. I was up on my crutches off and on between operations. One day I was cruising down one of the halls, when I saw another patient that looked very familiar. Guess who it was? The guy I had said hello too at the Tampa hospital, in physical therapy. We became good friends and spent a lot of time together. It turns out that he was a follower of Jesus too. He was a fighter pilot and God had helped him bail out when his fighter was in a high speed dive and the canopy wouldn’t open. Through this experience God made himself real to him and he received Jesus into his heart. We talked a lot about Jesus and prayed together. One day he gave me a cassette tape that I listened to that afternoon. It was a tape that a pastor from a church talked about the love of God for me. Because of this love, I should give Him my life. I don’t know exactly what he said that touched my heart but my heart broke. I started really weeping. Something turned around in my heart and I believe for the first time I gave Jesus the leadership of my life. Before this day I had a constant draining of infection from the right side of my knee for about a year and a half. That day, it dried up. It is wonderful that Jesus would move heaven and earth for me. He finds lost arrows, cuts off arteries, hears cries for mercy, puts disciples of Jesus in my room, moves fighter pilots from place to place and sends me at the right time a special cassette tape.

The Fighter Pilot in this story is Colonel Kris Mineau and his full story is here.