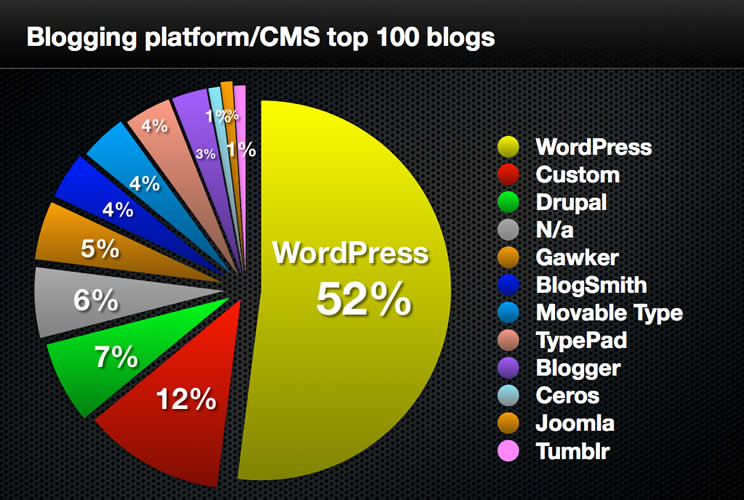 In some circles, a blog sounds like a humble website where one shares their latest holiday snaps. But in the corporate world, blogging has the underlying dimensions of inbound marketing. In a report by HubSpot, 69 percent of businesses attribute their lead generation success to blogging.

A blog can humanize a brand, helps to increase search engine traffic, and — over time — helps to establish your brand as a thought leader in whatever topic you’re writing about.

WordPress, Tumblr, and Blogger are three popular blogging platforms (with the former powering 35 percent of the known internet).

Founded by Matt Mullenweg in 2003, it’s fair to say WordPress has set the bar for all blogging platforms based on the numbers alone. After all, it has just shy of a 60 percent share of the CMS Market, with Joomla coming in second with just under 6 percent of the market.

WordPress is available in two similar but separate flavors; WordPress.com and WordPress.org.

WordPress.com provides the simplest route to enter into the world of WordPress. It’s free to use, and all you have to do is sign up on the site, choose a theme, and you’re all set to start on your blogging journey.

You’re given a WordPress URL as standard but you can opt for a custom domain for $13 a year. A premium plan is also available where you can remove ads and monetize your site. This free-hosted version gives you all the benefits of WordPress including the user-friendly interface and pre-installed plugins. Plus support, security, and maintenance are all taken care of by Automattic themselves.

However, the free-hosted version provides little room for customization and you can’t install third-party themes and plugins to add more features and functionalities. If you want to install third-party plugins and themes on WordPress.com, then you have to upgrade to the business plan which costs around $299 a year.

WordPress.org is the self-hosted version of WordPress. It is a free and open source platform that you can download and host anywhere you like via the services of a decent hosting provider. Once you’ve hosted your site, you’re free to do whatever you like.

Unlike the free-hosted version, WordPress.org allows you install a plethora of third-party plugins and themes. The WordPress plugin directory has over 50,000 free and premium plugins that can help you add an array of functionalities, customizations, and enhancements to your site — from email marketing integrations to advanced analytics and everything in between.

Plus, as an open source and self-hosted solution, you have full ownership and control of the code. That’s great if you have the skills to make use of that freedom, but on the flip side, total ownership means that you’re also in charge of updating and maintaining your WordPress website, which can become complex as you add plugins into the mix.

WordPress.org regularly releases updates which you need to install. These updates are critical to maintaining the security of your site. Failure to install the updates in time can leave your site vulnerable to cyber attacks. Plus, open source platforms allow for anyone to access the code, including hackers.

Out of the three blogging platforms, Blogger is actually the oldest blogging solution having launched in 1999. It played a key role in popularizing blogging, both professionally and personally. Evan Williams of Pyra Labs was the man who launched Blogger before eventually selling to Google in 2003.

It’s free to set up an account on Blogger. In fact, all Google members get a free “.blogspot.com” domain as part of the free package. If you want a custom domain, you can buy one and direct it to your Blogger site.

Blogger is easy to set up and use, as you would expect from any Google product. You can choose from a selection of site themes and make use of the drag-and-drop page designer. Blogger also comes integrated with Adsense which enables you to quickly monetize your site. And as a hosted blogging platform, Google looks after security, updates, and maintenance, so you can focus on publishing content.

Blogger is first and foremost a pure blogging platform, and this itself presents many limitations. Besides presenting your blog content in reverse-chronological order on the main home page, it does not give you the option to create a static home page or a landing page. There’s very little versatility to grow and evolve your Blogger site beyond a mere blogging site.

Plus, in terms of customization, you’re somewhat limited to what you can do. You’re restricted to the options available on the theme editor. Any further customizations would require you to manually edit the HTML and CSS coding in the back-end, and that can only be considered a benefit if you know how to code.

Also, Blogger does not have a dedicated customer support team. Any issues, you would have to go to forums or look for solutions on search engines.

Tumblr is actually a microblogging platform, more akin to Twitter than WordPress. Created in early 2007, Tumblr has become a worldwide Internet phenomenon, gathering  426 million users as of July 2018.

A Tumblr blog is free to set up, and you can choose from a range of free themes. Premium themes are available from anywhere between $9 to $49. For the added cost, the premium themes do offer a greater degree of customization and administrative abilities than its free counterparts, that’s unless you are not familiar HTML and CSS coding.

The minimalist interface is user-friendly and allows you to self-schedule your posts and integrate with Google Analytics. But perhaps the most valuable asset of Tumblr is its very active community. This makes it easier for you to grow an audience, answer questions from readers and re-blog other users’ content.

To be successful on Tumblr, you must adapt to their relatively unique format. Tumblr’s algorithm prefers posts that are heavy on imagery and light on copy. If you intend to use Tumblr to write long-form articles with no image, then you will struggle to build an audience. Instead, Tumblr is better suited to visually compelling brands who have high-quality imagery to share.

Similar to Blogger, Tumblr does not give you much room for growth or additional functionality. There are no widgets or plugins to enhance the platform’s functionality, for instance. Moreover, we’re yet to see any established brand use Tumblr as their core publishing platform. Instead, it’s seen as a complementary solution to reach the growing Tumblr usership.

Which Blogging Platform is Best For Your Business?

If you’re looking to build a corporate blog that can eventually expand and accommodate things like web forms, email marketing integrations, advanced analytics, and even eCommerce, WordPress.com or WordPress.org is almost certainly the best option here.

However, Tumblr has a growing, dedicated community that boasts its own culture, and if your brand focuses more on imagery than it does on words, Tumblr could be the way to go.  Plus, unlike with WordPress.org, you won’t have to worry about updating and maintaining your Tumblr blog.

Blogger on the other hand is arguably the most straightforward platform of the bunch — which is both a good thing, and a bad thing. You can start publishing quickly, but the sheer lack of customization and extendability means it’s only truly useful for small, personal bloggers. Monetization via Google Adsense is a plus, but it’s not exactly a feature that enterprise companies will want to leverage.