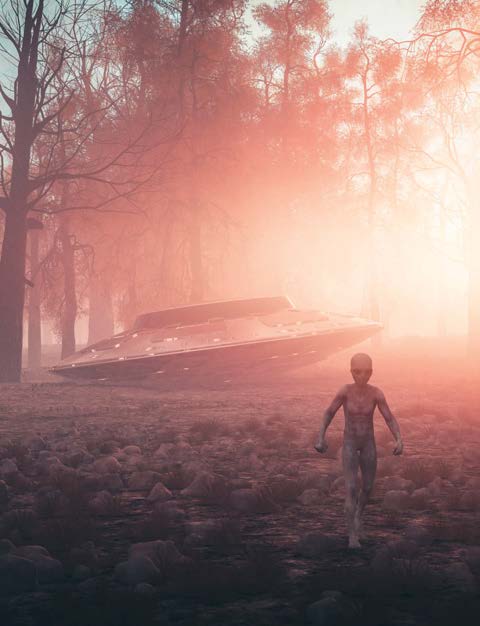 Surveys show half of Americans believe intelligent aliens exist.1 No doubt, a major reason is the dogmatic assertion of many scientists that aliens must exist.

Yet why are the secularists so passionately convinced of aliens? For several reasons, complexity of life being one. Numerous evolutionists argue that a few billion years isn’t enough time for life to evolve. Possibly it started evolving somewhere else in the older universe and was later “seeded” on earth by aliens. Maybe aliens even created life! Richard Dawkins, evolutionary biologist and atheist evangelist, thinks it’s possible. In an interview for the documentary Expelled, he suggested aliens could’ve evolved,
developed sophisticated technology, and “designed a form of life that they seeded onto, perhaps, this planet . . . it’s possible
that you might find evidence for that if you look at the details of our chemistry, molecular biology, you might find a signature
of some sort of designer.”2 His willing acceptance of aliens as creator but not God is testament to his heart’s suppression of
truth (Romans 1:18–23).

Aliens seem obvious to evolutionists because life isn’t a special creation. If it randomly, accidentally happened on earth, surely in this vast universe it happened somewhere else. This reflects the secular notion that the earth isn’t special.

But alien life doesn’t line up with Scripture. The earth was uniquely created by God to be inhabited (Isaiah 45:18). Throughout the days of creation, God made various living things and described how they’re to live on earth. God made man, His image bearer and crowning glory, to live on earth and have dominion. Nothing like this is said about any of the other “lights in the expanse” (Genesis 1:14–15). Their purpose and design were different and evidently not intended for life.

The possibility of intelligent alien life is more problematic. The Bible says the entire universe was corrupted by sin and the curse (Romans 8:22). If intelligent aliens existed, they would be cursed yet unredeemable. How can a “Wookiee” or “Vulcan” be saved? They’re not blood relatives of Jesus, so His blood doesn’t pay their sin debt. Scripture says Christ died once for all and that Jesus is both God and man, nothing else (1 Peter 3:18; Hebrews 9:27–28, 10:10). God’s redemption plan is only for human beings.

Despite all the hype, effort, resources, and money spent, no alien life or signal has been found. Yet secular faith won’t die. Why? Along with believing they’d provide powerful proof for evolution, aliens are often presented as beings who’ll unravel the universe’s
mysteries, unveil life’s meaning, cure our diseases, fix the world’s problems, and usher in utopia. Sound familiar? They’re a “God replacement” that’s awfully appealing. You get all the “divine benefits” without accountability and judgment. However, God is
irreplaceable and biblical reality is reality. The earth is unique and the spiritual focal point of creation. It’s where God visited,
became our blood relative, died on a Cross, and defeated death to make a way of salvation for His unique image bearers alone. Sorry, Chewbacca.

1 https://www.newsweek.com/most-people-believe-intelligent-aliens-exist-377965
2 Ben Stein: “What do you think is the possibility that intelligent design might turn out to be
the answer to some issues in genetics, or in evolution?” Richard Dawkins: “Well, it could come
about in the following way: it could be that at some earlier time, somewhere in the universe,
a civilization evolved by probably some kind of Darwinian means to a very, very high level of
technology, and designed a form of life that they seeded onto, perhaps, this planet. Now that
is a possibility, and an intriguing possibility. And I suppose it’s possible that you might find
evidence for that if you look at the details of our chemistry, molecular biology, you might find
a signature of some sort of designer, and that designer could well be a higher intelligence from
elsewhere in the universe. But that higher intelligence would itself have had to have come
about by some explicable, or ultimately explicable, process. It couldn’t have just jumped into
existence spontaneously. That’s the point.” Expelled: No Intelligence Allowed (2008-04-18)